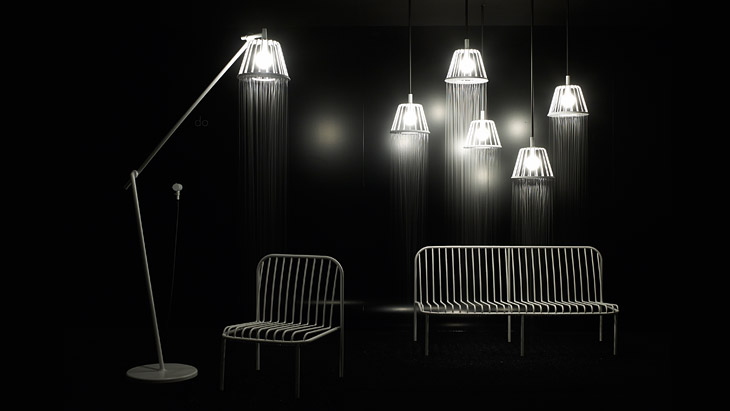 AXOR WaterDream – visions for the bathroom

What does the bathroom of the future look like? What are the concepts that will shape it? With the AXOR WaterDream project, AXOR is looking for innovative solutions for the bathroom and new ways of dealing with water. For the AXOR WaterDream 2016, under the motto 'Create your own Spout' famous designers were invited to realise their dream bathroom of the future. In collaboration with AXOR, David Adjaye, Werner Aisslinger, GamFratesi, Front and the Studio Massaud developed innovative mixer spouts using unusual materials such as clay, granite, wood, marble and brass. Through their choice of materials, the design partners shed light on the emotional significance of the mixer in conjunction with the interior of the bathroom. The AXOR WaterDream 2016 is the conceptual continuation of the 2015 project.

AXOR WaterDream 2016 – The bathroom of the future using new materials

The motto of the AXOR WaterDream 2015 was also "Create your own Spout": How far can you take freedom in product design without the limitations associated with industrial manufacturing? In conjunction with the Ecole cantonale d'art de Lausanne (ECAL), AXOR  explored these boundaries as part of an initial study. Design students from the University of Lausanne developed concepts without any design specifications, only the material and the mixer base were defined.

The AXOR WaterDream 2015 is also based on the innovative AXOR U-Base. The universal base for the spout becomes the key to achieving the ultimate creative freedom in mixer design: custom-made spouts can simply be fitted on the base. The product design students' one-off designs, made of hand-blown glass, demonstrate the forms that mixer spout customisation can take.

In 2013 AXOR invited two of the most sought-after international design studios to put a new interpretation on the shower, combined with Hansgrohe's more than 111 years of shower expertise: the aim was to show culturally different perspectives. This was the task facing the Front designer trio of Sofia Lagerkvist, Charlotte von der Lancken and Anna Lindgren from Sweden, and the Japanese Nendo studio with creative head Oki Sato.

The Front designers make it possible for us to experience the way that water is brought into the bathroom, in its most original form. Their AXOR WaterDream brings the traditionally concealed world of installation to the forefront, and plays with the elegance and beauty of technology: a homage to workmanship. On the other hand, Nendo took its inspiration from a more emotional living environment outside of the bathroom, and presents the natural fusion of light and water. The underlying concept is to add a sense of homeliness to the bathroom, offering a humorous interplay between man, water and space. Both bathroom visions put a new interpretation on showering, this accomplishment of civilisation, in a charming and unconventional way.

Nendo and Front – between living environment and concealed technology

French designers Ronan and Erwan Bouroullec, Frenchman Jean-Marie Massaud and Milan-based Spanish designer Patricia Urquiola caused a sensation with their bathroom visions at Fuorisalone in Milan in the spring of 2005. At the world's leading furniture trade fair, the Bouroullec designer brothers presented a functional modular system with a broad range of options for users. “Nature-inspired design” was the approach taken by Jean-Marie Massaud. His bathroom vision set the stage for a living and bathroom environment with excerpts from the natural world and a lake for a bath tub. Patricia Urquiola focused on sensuality and magic: set in what looked like an enchanted forest, tree-like mixers and showers glistened, appearing to stem from a world of bamboo. The three 2005 AXOR WaterDream bathroom visions resulted in the creation of AXOR bathroom collections.

Images
Back to overview