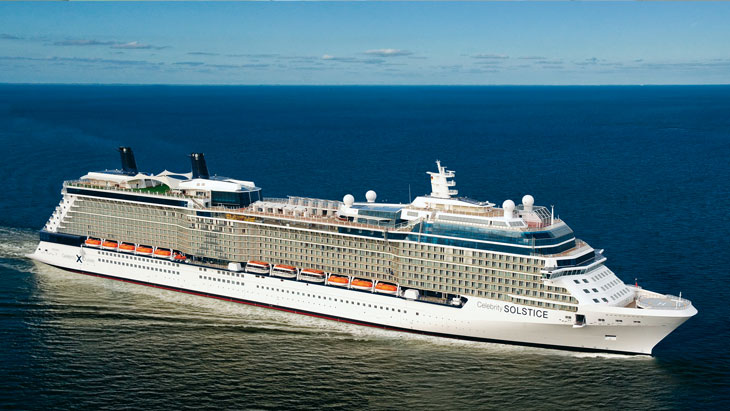 Celebrity Solstice was named after a stellar event that people have always paid lots of attention to: the solstice. The delivery of the 317m long ocean liner in 2008 proved to be a special event: it was the largest, most expensive cruise ship that had been built up to then in Germany. It was also the first of five sister ships of the new Celebrity Solstice class, which would be built at the Meyer Werft shipyard in Papenburg. Hansgrohe products were used in the bathrooms on all of them.

Up to 2,850 passengers can relax in a luxurious setting on the high seas, indulge in some sport and a wide range of entertainment. The theatre accommodates 1,100 people, more than most municipal theatres, and there are ten restaurants with delicious culinary delights to indulge the tastebuds. While the spa and fitness areas are to be expected on a cruise ship such as this, it's quite a surprise to see the lawn surface on the open upper deck: this could be used for playing bowls or for a picnic in the open air – all on the high seas. The environmental technology, which was used in many places when building this giant yacht, is also innovative. Thus, for example, solar modules contribute to the energy supply.

Hansgrohe mixers and shower systems ensure that the Celebrity Solstice's high standard of quality is maintained in the bathrooms too. However, the interior designers took care to ensure that the 13 passenger decks also look attractive. Thus, Pharo Comfort Plus Showerpanels ensure plenty of comfort in the showers, while mixers from the Talis S range provide the wash basins with timelessly modern design touches.

Find out more from the Celebrity cruise operator
Back to overview